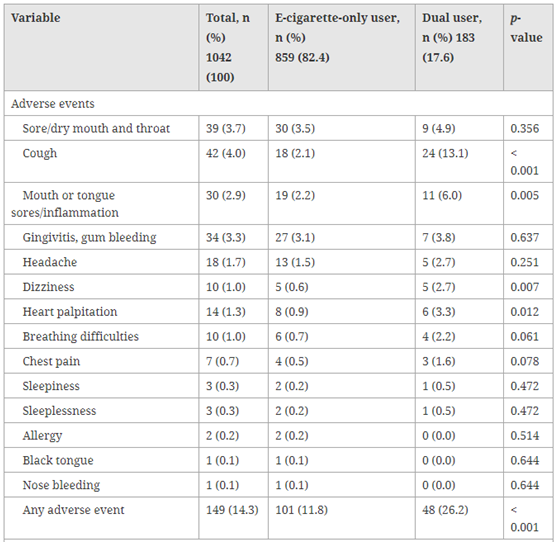 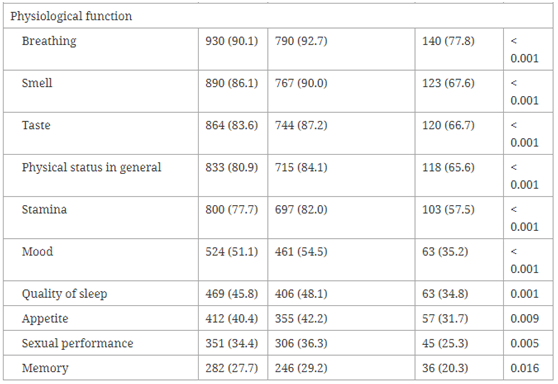 A series of binary logistic regression analyses were performed to compare the health improvement rates of the two types of users. E-cigarette users were more than three times more likely to have improved smell, breathing, taste and endurance than double smokers. They were also twice as likely to report physical conditions, mood and sleep quality. There was no significant difference in the rate of improvement in appetite, sexual ability and memory between e-cigarette users and dual users.

Our study found that only e-cigarette users reported improved health and reduced health impact on vaping compared to two users. Most users who only used e-cigarettes reported better breathing and sensory function and reported only minor adverse events since they started using e-cigarettes. Compared with traditional cigarettes, both smell and taste function are better. Low exposure to potentially toxic substances in e-cigarettes may have a similar but perhaps weaker effect on olfactory mucosa.

Improved breathing, general physical condition , and endurance were associated with past smoking habits and duration of e-cigarette use. The most common improvement in these physiologic functions was respiration, is in line with a study in the Netherlands. 90percent of them have better breathing.

Users of e-cigarettes alone experienced significant improvements in their mental health. They reported greater improvements in mood and sleep quality. Because they think these e-cigarettes are the same attractive with traditional cigarettes and are a less harmful alternative to it. Improved emotional and psychological quality of life and perceived better respiratory function may explain positive changes in sleep quality.

Adverse events, oral and throat discomfort. The use of glycerin, propylene glycol - glycol, and electronic liquid flavoring agents may form during the steam generation process as thermal degradation by-products, which can also be tongue and/or oral pain and oral and throat irritation. Finally, inhalation of e-smoke sol elements such as silicon, sulfur, calcium, titanium, and lithium is associated with throat irritation.

Why Your Throat is Uncomfortable While Vaping?

In summary, our study concluded that most users who used e-cigarettes alone reported more beneficial perceived physiological function and that adverse event were less frequent than among dual users. However, despite the uncertainty of long-term health consequences, the short-term benefits of e-cigarette use could strengthen users. But e-cigarettes are not without their negative health consequences. The effects of e-cigarettes on the body will take a long time to study and investigate. Minors under the age of 18 are prohibited from smoking.

2019 What Does A Heavy Smoker Think Of E-Cigarette；

4 Data Show That Vaping Is Safer Than Smoking；

Is It Safe To Use Vladdin?