What is the difference between nicotine salt liquids and ordinary liquids? Nicotine salt has become the main trend this year, and more and more Liquids manufacturers are trying to use nicotine salt.How much do you know about nicotine its chemical composition based on salt? Where did the salt come from?Nicotine is naturally present in tobacco leaves and exists in the form of salt, but this special salt is not suitable for evaporation in vape. 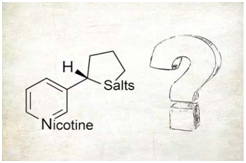 This "salt" cannot be mixed with salt!

In the late 1950s and early 1960s, The tobacco company began adding ammonia or diammonium phosphate to tobacco to improve the taste of cigarettes.This produces a nicotine "free base" form that allows for faster inhalation of blood during smoking, making smokers more satisfied and thus dominant in the tobacco market for decades.To separate nicotine from tobacco leaves, it is first converted to its free base form and then extracted using a solvent.

This free radical nicotine is most commonly used for atomization in Vape, but the nicotine absorption rate is lower compared to cigarettes. This may be because the vapor particles are larger in size than the tobacco particles, resulting in inability to penetrate deep into the lungs.By investigating the heart rate in the experimental study, the satisfaction of the user's report, and the plasma nicotine levels of the test participants, it was found that some nicotine-containing preparations containing organic acids evaporate to produce nicotine equivalent to cigarettes.

In addition, these formulations improve nicotine stability and reduce the damage to the throat caused by free nicotine used by vaper.That's why some people believe that nicotine salt is more useful for quitters because nicotine has a greater effect on smokers, and when smokers turn to Vaping, they are more satisfied.

One such formulation is nicotine benzoate, which is formed by the addition of benzoic acid to nicotine. This is also the most commonly used nicotine salt formula in the US's popular small smoke equipment. Vladdin's Liquids is made from the United States imported nicotine salt, making the taste more mellow and gentle.