Today I’d like to introduce Vladdin. Vladdin is a draw activated closed pod system using a 1.5ml pod. Although the device was provided by Vladdin for this review, it will not affect my ability to provide a completely honest review. It can be purchased directly from Vladdin for $36.90 or at may popular retailers. It is available with TPD compatible 18mg and 50mg versions. Both versions use nic salt. Pods are sold in packs of 2 or 4 pods, with four flavours to choose from. There is VCT(vanilla custard tobacco), Tobacco Ice, Peppermint Tobacco, and Salt NIX Northern Tobacco, which is included with the device. There is also a variety pack available which contains one pod of each flavor.

Vladdin comes in a rectangular gray box. The front features an upraised picture of the device, a jumbo nicotine warning, a few bullets that highlight features like the magnetic connectors, a sticker in what I assume to be Chinese, another sticker that has the pod flavor and strength in the upper left corner, and Vladdin printed in a reflective foil inside of a black circle. There’s also a glossy pattern that looks like somebody went crazy with a Spirograph around the black circle, overlapping the top and side of the box wrapping on to the back. On the left side of the box it reads Vladdin in black, directory listings, and some of the Spirograph work. On the right side is the black Vladdin branding again and a bar code sticker. The top just has Vladdin in black. On the bottom is a bar code sticker and a black box with the production batch number and pod expiration date. Turn it over and you’ll find another big nicotine warning label. The device is also briefly described in the book, listing basic juice ingredients and nicotine warnings in five languages. Below the block of text is some contact information, country of origin information, and a few warning pictograms.

Inside the box is a sliding plastic tray with individual parts, including the Vladdin, USB cable, and pod. The pod itself is in an aluminum foil sealed plastic container. All the documents are under the tray. There is a quick launch guide, warning guide and a warranty card. 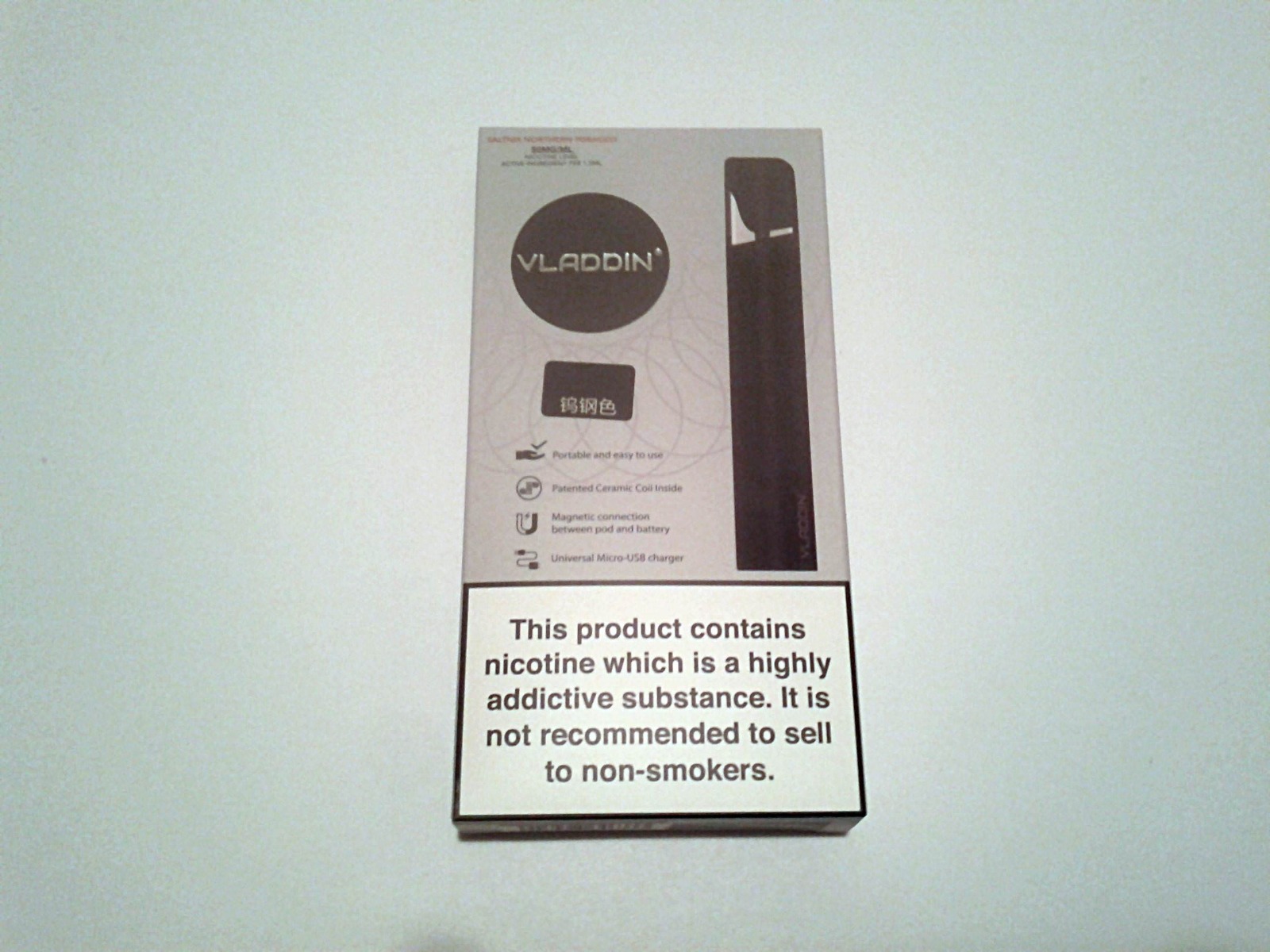 Vladdin is a slender “stick” shaped pod system with a metal frame. While most images known to the public, including the common packaging and online availability mostly features the black color, the units I received are definitely the black chrome color. Instead of using tabs, Vladdin uses magnets to hold the pods in place. The pod only fits when matching the designed angles of both the pod and the battery. The USB charging port can be found at the bottom of the device. There’s a bright white LED on the front of the Vladdin, which glows when you draw and flickers to remind you of certain battery conditions, such as charging, full, or dead batteries. It is difficult to describe the overall shape of the device. It bulges in the center and gradually thins, with a narrow edge on either side. One side bends toward you, while the other end bends away from you.

The pod and equipment are identical in shape. The top of the lip on the pod is black and the rest of it is transparent. A curved transparent window on one side of the upper half of the pod helps you monitor the current liquid level of the pod. The top of the pod is tilted to match the angle of the device, and the bottom is slightly narrow to fit the pod inside the device. When you first open the pod, there is a small silicon plug in the mouth of the pod that needs to be removed. If you want to use the plug as a pocket plug, it can easily be reinserted. In addition, there is a color-coded hard plastic cup which covers the bottom of the pods. The colors are coordinated with the flavors of e-liquid. On the bottom of the pod there is a sticker covering the air hole that needs to be removed before usage. The contacts on the bottom of the pod appear to be gold plated. 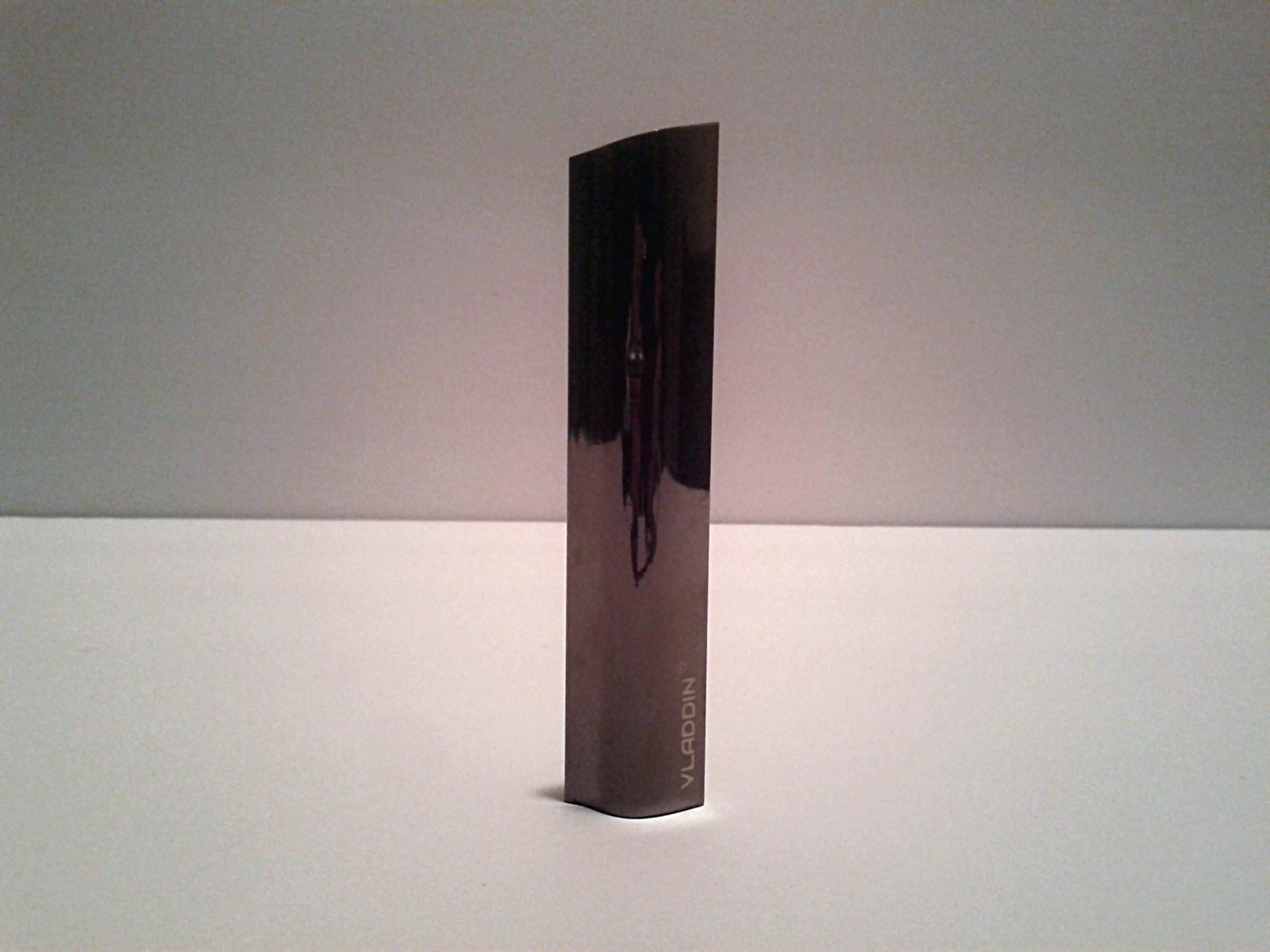 The magnetic contact system works well. If you swing the pod back and forth, there’s a little give, but it’s firmly anchored. Like any pod system I’ve used, the bottom contact/air inlet area appears to have a little bit of leakage. In most cases, it remained fairly dry, with only minimal juice loss concentrated where the bottom of the pod sits, but a few times when I pulled the pods out, I found them to be fully soaked in juice, both on the sides as well as the bottom. I haven’t found any random juice on my hands or on the outside of the equipment. It all seems to stay within the device itself and relatively clean.

It’s worth noting that if you’re one of those people who’re afraid of ceramics, this pod uses ceramic coils. I couldn’t find too much sold resistance and Vladdin claims the resistance is 1.2 to 1.5 ohms. The battery is only 350mAh, but it seems to have good battery life. At full charge, I can kill almost the entire pod, with only a little bit remaining by the time the battery dies. Vapor output is significantly decreased once the battery life goes below half. LEDs don’t show battery life very well, in fact it doesn’t change color, flash, or show any sign of current battery power. It only darkens slightly as it decreases. The light flashes when you unplug or plug it in, when the battery is full, or the battery is dead. If you need to get your fix while its charging, you can vape it while charging. The charging speed isn’t the fastest but it also isn’t too slow, I would say it is more in the middle,of charging speeds.

It’s easy to use. Once you open your pod you can begin vaping. For pod systems, the draw is pretty tight but it feels good. It’s okay to include the salt NIX Northern Tobacco pod, but it’s nothing worth writing about. I’ve definitely tried better, but it’s not bad. 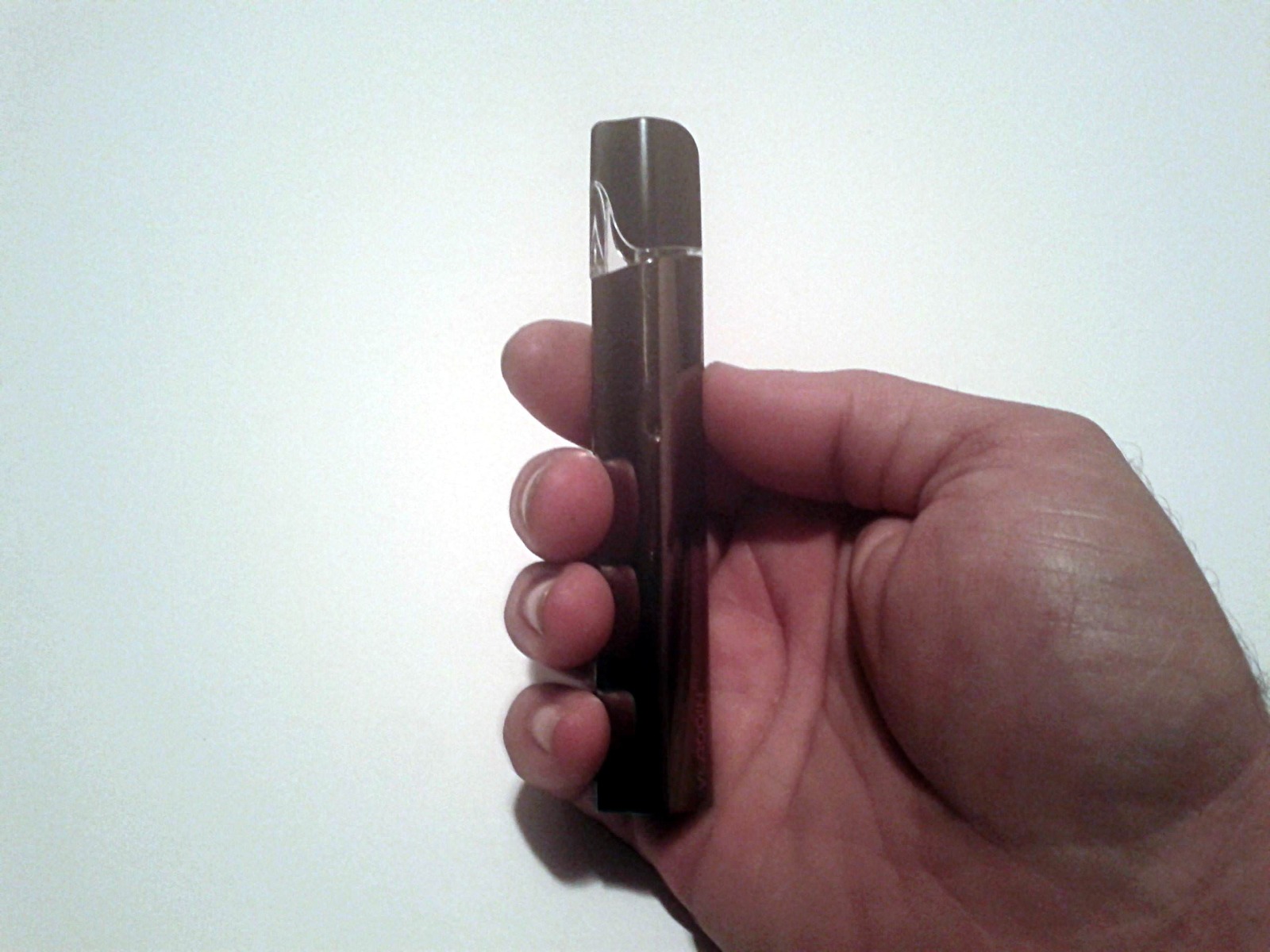 Equipment with the pod

If you are looking for a JUUL alternative closed pod system, this may be the one for you. I really like the design. It’s stylish and sophisticated. In my opinion, it’s more refined and mature than many other pod systems. I like the magnetic connection and this one holds tight, so there is no need to worry about the pod slipping out. You don’t have to force the pods in and out like some other pod systems. I wish the LEDs were less bright and more useful. In my opinion an LED diffuser would not only help treat the brightness but would also increase visual appeal. Turning the LED lights on while drawing may be “cool”, but it’s not very useful and I would rather the LED display battery life. I also want to see the pods get a little thinner at the mouth. It’s not uncomfortable and is actually very easy to draw, but a little more taper on either end would make it even easier to draw and allow for the lips to create a tighter seal. I’m still not completely sold on the idea of closed pod systems simply based on availability. With Vladdin, you can’t just have an “oh shit” moment and run to the gas station to buy more pods. The device should also offer more flavor options. The four current flavors may be somewhat FDA approved, but this definitely limits the selection of flavors, and in return limits marketability and desirability for me.

It is with great regret that due to our current inability to collect payment on the website and the increasing difficulty of shipping, we have decided to suspend the retail function on the website. We appreciate your support and apologize for any inconvenience this may have caused you.

We'll continue to run our website, and other functions will remain normal.

We’ll get back to you at our soonest available.