Study The Dependence Of Smoking And Vaping On Nicotine

Study the dependence of smoking and vaping on nicotine.

American Indian population has the highest percentage of smoking and EC use in the United States, focusing on the dual user subset, defined as people who smoked cigarettes and used ECs on some days or every day of the past 30 days. Study the dependence of cigarettes on dual users.

About two-thirds used a tanking product. Eleven percent used ECs without nicotine and another 9percentage were unsure of the nicotine content. A minority 40percentage enjoyed vaping more than smoking, and most 76percentage would smoke first on days they did both. Thirty-one percent vaped within 5 min of walking and another 24percentage within 30 min. Although the two-item heaviness of use index did not differ significantly between smoking and vaping, the ten-item Penn State Dependence Index PSDI suggested greater dependence on smoking than vaping 11.02 vs. 6.42, respectively; p less than .0001. The most common reasons for vaping were to reduce smoking 79percentage, enjoyment of flavors 78percentage, and the ability to vape where smoking is not allowed 73percentage. Perceptions of less harm to others 69percentage or to self were the next most common 65percentage. Fewer than half used ECs to reduce stress, for affordability, or because others used them. 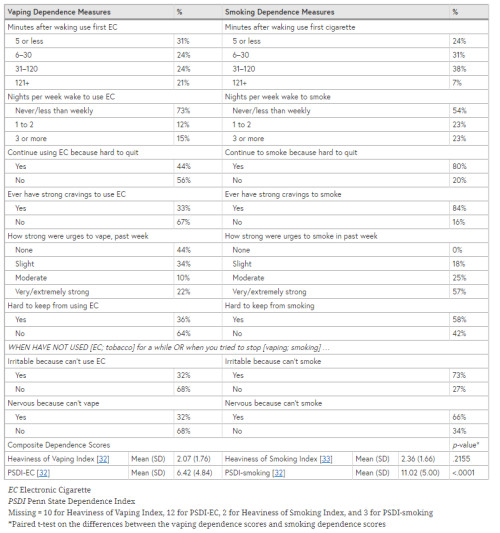 Individual measures show more dependence on smoking than vaping. The heaviness of vaping index and heaviness of smoking index did not differ significantly among the dual users p equal 0.22, but the mean PSDI dependence score for vaping was significantly lower than that for smoking 6.4−4.8 vs 11.0−5.0, respectively; p less than 0001. Results were unchanged when median values of the PSDI were compared via the Wilcoxon signed-rank test 6 vs 11, p less than.0001. 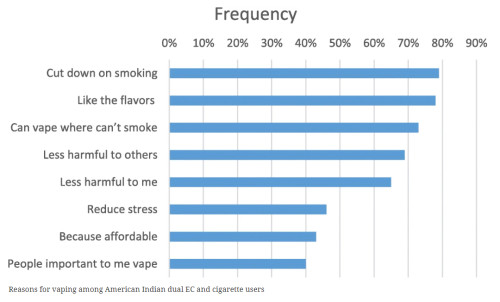 The top three most commonly endorsed reasons for vaping were to cut down on smoking, liking EC flavors, and being able to vape in places wherein smoking is not allowed. Perceiving less harm to others or to oneself compared with smoking were the next most frequent responses. Less than one-half endorsed using EC to reduce stress, reduce cost, or because other persons important to them used EC. Other reasons write in for EC use were endorsed by only two 4.5percentage participants.

Nearly 20percentage of dual users used ECs either without nicotine or without knowing if the product containing nicotine. The PSDI indicated greater dependence on smoking than vaping. Reasons for vaping were nearly equal between smoking reduction and enjoying flavors.