The store will not work correctly in the case when cookies are disabled.

A reversal of e-cigarettes occurred on the evening of September 13, local time, US President Trump issued a tweet saying: “ While I like the Vaping alternative to Cigarette, we need to make sure this alternative is SAFE for ALL! Let’s get counterfeits off the market, an keep young children from Vaping! " 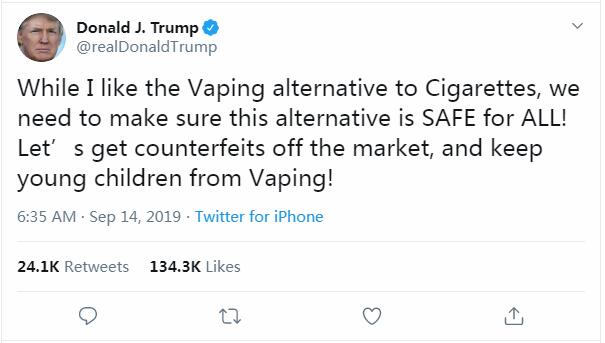 More than 12,800 people have left a message under this tweet, and 61,500 people like it. Some of them said: "I vape and help me stop cigarettes after 25years. I feel better and breath better" Another 63-year-old man said: "I’m 63 and quit smoking cigarettes 3 years ago (and started vaping.) I vape very low nicotine e-cigs. I feel great, my asthma is gone, lungs clear." Investor Michael Coudrey said. "While I agree with you Mr. President, I don't want you to hurt small-time business owners or vape distributors with over-regulating because maybe 6 people died when tobacco kills 600,000 per year." 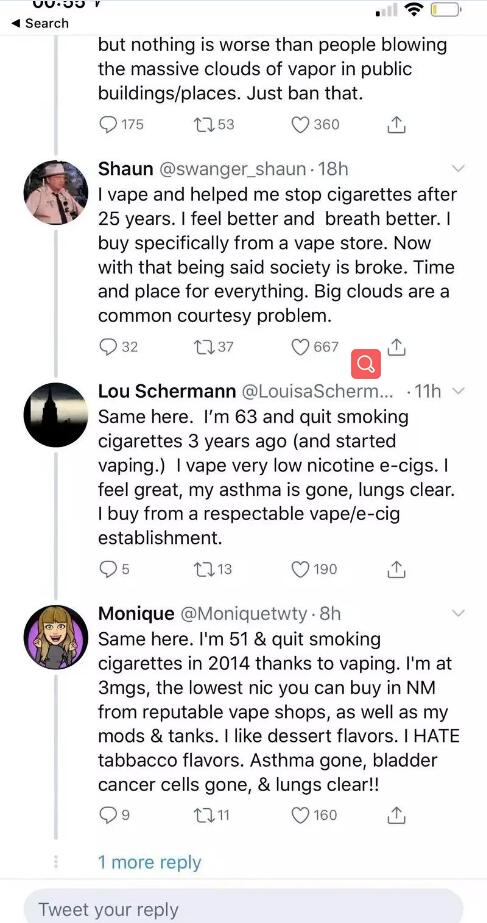 At the White House petition online, a signing action “Stop Donald Trump from signing the federal flavor ban of e-cig products.” has also made a breakthrough. The action launched on September 11th local time, the number of signatures has exceeded 100,000. According to relevant regulations, the White House needs to make an official reply to the petition within 60 days.

Earlier, the US media reported that six people were suspected of dying from the lung problems caused by e-cigarettes, pushing the product to the forefront. The industry analysts believe that Trump's attitude towards the electronic cigarette industry has suddenly reversed, indicating that the US government has abandoned the individual and emotional factors and begin to consider the issue of its normative development from the overall situation of the industry.

After Trump’s first voice on e-cigarettes, global public opinion has been polarized. One party classify e-cigarettes and cigarettes into one category, and the other party indicates that the e-cigarettes with standard ingredients are much less harmful to people than traditional tobacco. They are good substitutes for tobacco. development of.

The authoritative media "Economist", which has a history of more than 170 years, said that “The facts have gone up in smoke, as so often happens during health scares. Although more research is needed, the evidence so far suggests that the recent vaping deaths in America did not come from products bought in a shop but from badly made items sold on the street. In five out of six cases, the tainted vaping products were bought illicitly; the other involved liquid bought in a legal cannabis shop in Oregon. One theory is that the vape fluid was mixed with vitamin E. This is an oil—something that should not enter the lungs. If inhaled, oil causes the type of symptoms that the stricken vapers display.” 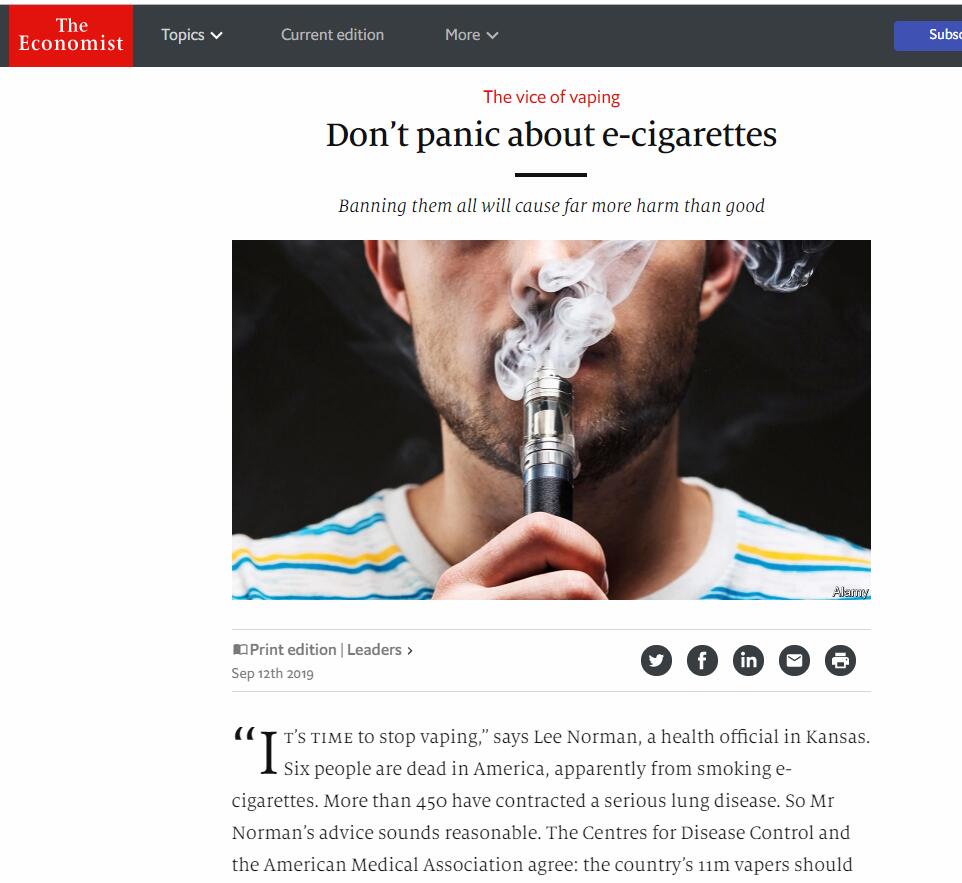 There is a saying that the lung problems caused by e-cigarettes reported at present are mainly due to the fact that users personally add vitamin E in e-liquid. It is not related to E-cigarette. Studies have shown that inhalation of vitamin E can cause lung damage in the smoker. The US Food and Drug Administration (FDA) hopes that the public will eliminate the blind panic of e-cigarettes. They said that e-cigarette users should not buy e-liquid products containing cannabis extract, nor should they use inferior products. “When you buy an unlicensed liquid from an unregulated channel, you don’t know what you are going to face. That’s why the government does not encourage people to buy wine in informal channels because of these fake wine may be fatal. In Costa Rica, for example, 25 people have recently died of methanol. Like alcohol, regulators should also clearly distinguish between illegal e-cigarettes and those that are legal but not certified,” the Economist magazine said. The Economist concluded that it is more sensible to regulate e-cigarettes than to try to eliminate them. "Using e-cigarettes can be a dangerous habit, but it is far less lethal than traditional cigarettes.

Support for e-cigarettes is also the British Ministry of Public Health. Martin Dockrell, head of tobacco control at the UK Department of Public Health, said: “These people buy or DIY illicit liquids, mostly containing cannabis ingredients such as THC (tetrahydrocannabinol). These products come from the black market. Unlike the United States, all e-cigarette products in the UK are subject to strict quality and safety supervision by pharmaceutical and health care regulators. They encourage e-cigarette users to report any adverse reactions. The National Health Service said: "So far, there is no evidence proving that smoking e-cigarettes can cause harm to people around you. The available evidence shows that the risk of any hazard (e-cigarette) is extremely low, even with second-hand smoke. In comparison, for the future tobacco control work, the NHS and the UK Ministry of Public Health support the use of e-cigarettes instead of traditional cigarettes.