Unlike most pod systems, Vladdin has a unique design that enables the user to have a comfortable and sturdy grip when using. Color options are limited but there is more than just black. The Vladdin is alluring and subtle in design, and while it may not be easy to tell from a distance, up close you can tell that a lot of thought has been put into it. Vladdin’s overall design and craftsmanship is great. The combination of ABS plastic, aluminum, and PCTG for the pod, creates a great balance of comfort and performance. To put simply, it’s lightweight and manages to never feel cheap when holding it in hand. Other devices will often compromise the robustness when creating a lightweight system. While others may lean towards a heavier design to impersonate luxury and durability. Vladdin has managed to create a product in the sweet spot, which I have found to be rare.

Vladdin uses a familiar design which utilizes a magnetic connection between the pod and body for a quick and easy swapping of pods. Each pod is made with PCTG plastic which makes it completely environmentally friendly. The PCTG material used also ensures that no fragments contaminate the e-liquid, effectively making it very safe to vape. The exclusion of glass pods makes the whole device lighter, more durable, and easier to use, cementing it’s position as a promising contender in the portable device market. 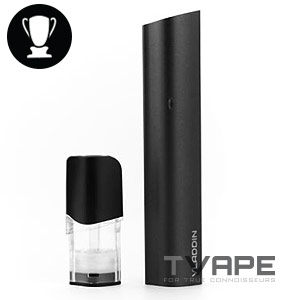 Unlike Bo One, which provides the customer with pre-filled e-liquid cartridges, Vladdin offers more options. The Vladdin has refillable pods, which allows any user to choose their own liquid. If someone likes having prefilled pods, Vladdin has thought of that as well. The Vladdin team definitely put time and consideration into selecting a very nice variety of e-liquid flavors for consumers to choose from, so nobody has to tire of the same flavor. Whatever your personal preferences may be, one of the flavors Vladdin offers is sure to meet your fancy.

The Vladdin operates similar to other basic pod-style devices, therefore there isn’t much to expect in terms of alternate vaping modes or advanced features. However, this doesn’t mean that the device lacks in capability, it is one of the few pod systems that can vaporize electronic liquids as well as oils. Yes, you heard me correctly. If you get the Vladdin refillable pods, you don’t only get a portable e-cigarette but you also get an easy to use and lightweight vaporizer for your favorite oils. Vladdin also offers basic low voltage and short circuit protection, a nice safety option for absolute beginners. 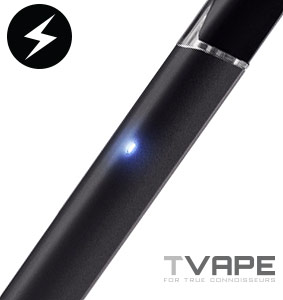 Whether you prefer your own e-liquids or the flavors Vladdin offers, Vladdin is an easy to use kit, even for those that are a little less technically inclined. The magnetic connection makes it easy to take out and replace pods. If you pick up the refillable pods, the filling process is simple. All you have to do is take off the top cap and remove the silicon stopper, then fill with your favorite juice. Vladdin can easily rival pod-like devices like Pax Juul in terms of practicality. Just rest the device on your lips and take a puff. Vladdin uses the built-in air sensor to start the device, making it button-less and essentially hands free. 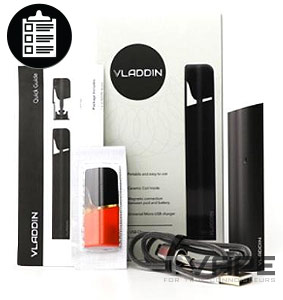