Unpack and start using, this device is not only easy to use but also easy to maintain. There is no button (it automatically triggers when you vape it) and there is no resistance change. 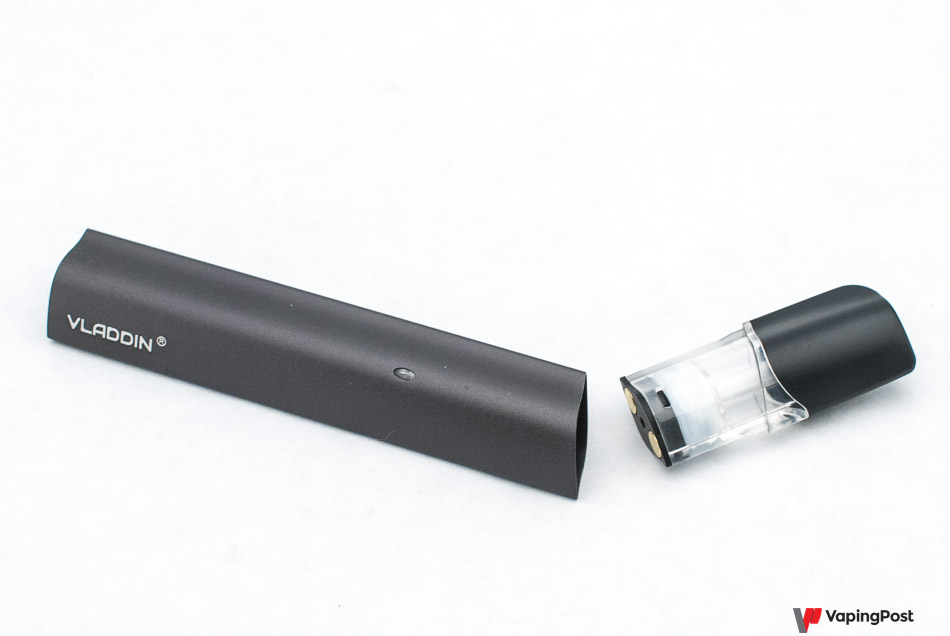 On one side there is the charging port which I used to charge the device, and on the other end is where the pod sits, which I filled with e-liquid. Since this is the refillable version, it is necessary to fill before vaping, and the filling process is not complicated. 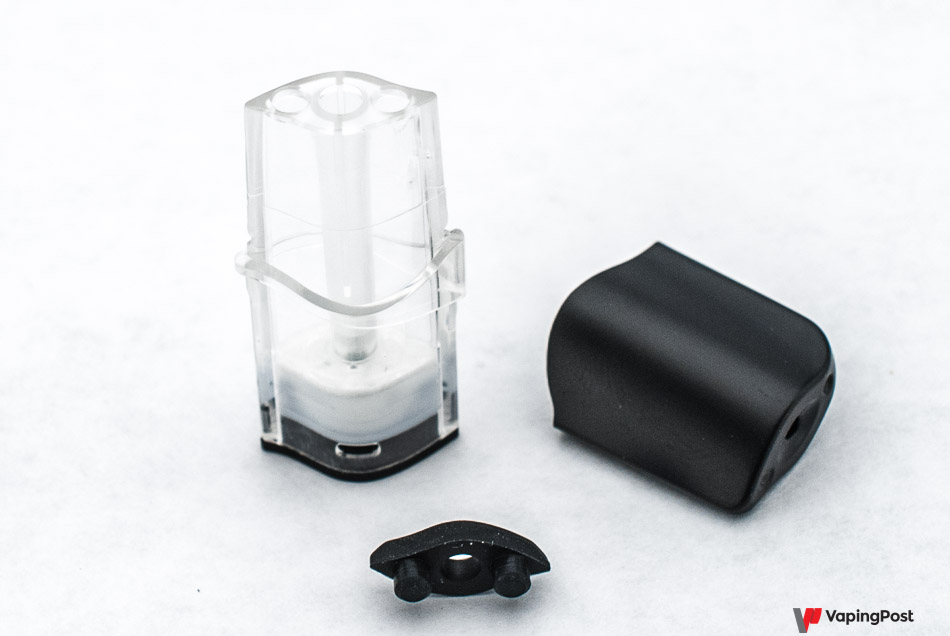 Remove the pod from the battery and remove the black suction nozzle. Then remove the top silicon cap and you’ll find three holes. According to the instructions, the filling is done on one of two holes: one is for filling the liquid and the other is for letting the air escape. The middle hole is the suction hole and therefore you do not want to get e-liquid in it. When the filling is completed, re-install the silicon cap and the top black suction nozzle. I had several other empty pods on reserve so I filled them all with my favorite e-liquids. I then put them upside down, put them in my car, in the direct sunlight, etc., only to find that none of them leaked, which made me very happy.

Vladdin re starter kit only weighs 18 grams and it can fit into a pen bag or pocket. It’s so light I sometimes forgot it was present. It’s very pleasing to the eye, the battery and pod blends perfectly together. This is all thanks to the design, which incorporated a pencil shape and considered the overall feeling: the body is anodized aluminum and feels comfortable. In the middle, an oval LED indicates the battery and operation status. The Vladdin uses a wave shape design which meets the needs of the lips and hands without any discomfort. The overall shape gives the feeling of elegance and comfort. There’s a micro USB plug on the bottom of the device that fully charges within an hour, and it can be vaped while charging... but I wouldn’t recommend it.

There are a total of 4 refillable pods in one pod pack, which need to be replaced after every 3 to 5refills depending on which e-liquid you’re using. When you feel the strength of the vape has declined or the taste has changed, it is time to replace the pod. 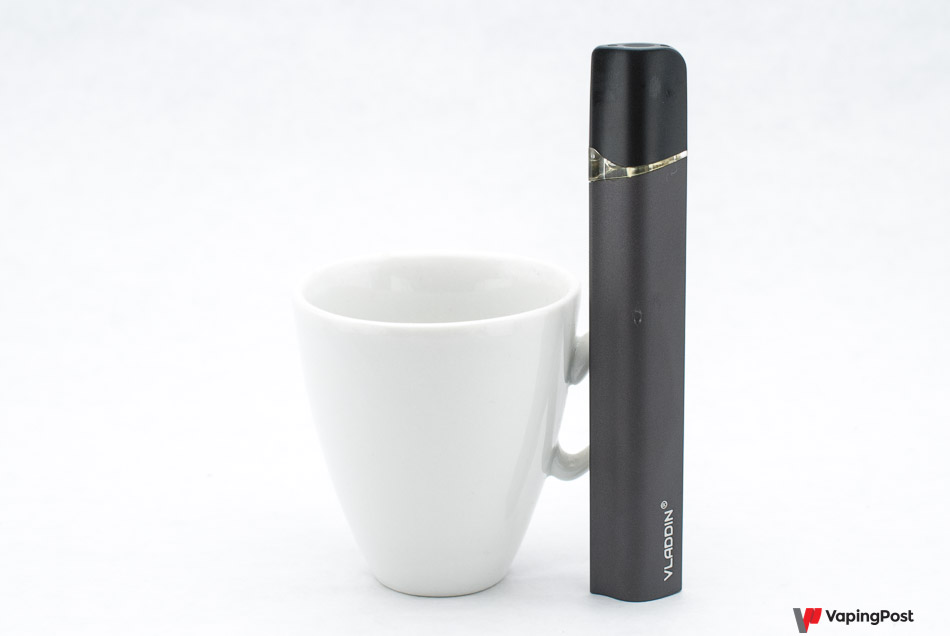 Vladdin RE starter kit can be vaped directly , which creates a feeling very close to the strength of smoking cigarettes. The automatic trigger is very well adjusted, so there is no force needed to activate the device when vaping. It produces a satisfying amount of vapor, roughly twice the amount of a cigarette. The taste is very good, and the impact on the throat is mild and gentle, it isn’t too aggressive and doesn’t create irritation. The taste and impact of the device is slightly softer when compared to other similar devices, so its better for those who don’t like a big hit and have no problem using it on a daily basis. However, it is not enough for those who want a big hit that will give them a buzz.

The 350 mAh battery provides a reasonable range of more that 120 sucks, equivalent to more than a dozen cigarettes. For this price point, I would say the cost performance ratio is great.

Vladdin comes in a white box containing a USB charging cable that can be used to charge on a computer or any other USB outlet. 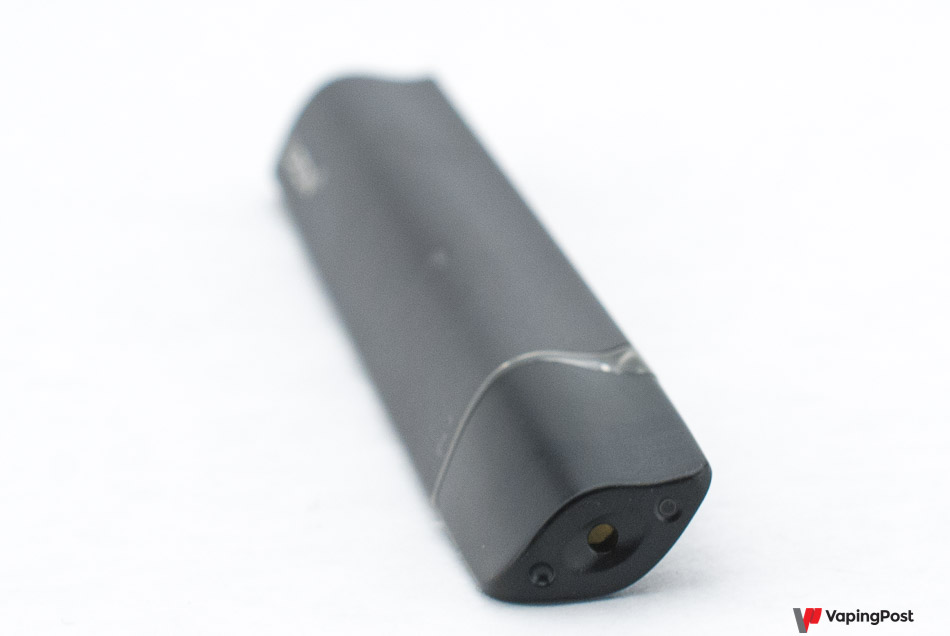 Vladdin is available in two versions: one is the prefilled pod kit and the other is the refillable pod kit. The battery used in each kit is unchanged and interchangeable, therefore you can buy according to your personal needs. Personally, I prefer the refillable version because it is more economical and better suits my personal needs...

Compared to other more powerful mods, this device has less vapor. This product is best suited for everyday users and for those who don’t desire a big vape cloud.