The U.S. centers for disease control and Prevention (CDC) estimates that e-cigarette is still a new thing and that the health effects of long-term use are unknown. E-cigarettes often contain nicotine, which is harmful to fetal development and cognitive development in people under the age of 25. In addition to nicotine, vapors from e-cigarettes are not entirely harmless. They contain some tiny particles that may cause cancer, and may also contain some heavy metals and volatile compounds [15]. Some studies have also shown that e-cigarettes increase the risk of heart disease and cancer.

In November 2018, the centers for disease control and Prevention (CDC) made its case to the public. They suggest that smokers should start using an e-cigarette and trying to quit smoking by it. However, it also reminds us that e-cigarettes are not harmless. Teenagers and pregnant women, as well as non-smokers, should not try them because they are less harmful than cigarettes [15].

After weighing the pros and cons, public bodies in both the UK and the US tend to agree that e-cigarettes are still better for smokers than cigarettes.

E-cigarettes may not help stop smoking

Nicotine replacement products (NRT) are the generic term for a number of smoking-cessation products that are primarily used in nicotine replacement therapy (NRT). Nicotine in cigarettes is an addictive substance. When you quit smoking, you will have a withdrawal reaction.

If nicotine patches, nicotine gum, or nicotine sprays are used to deliver nicotine to the blood during smoking cessation, the withdrawal response can be alleviated and the success rate of smoking cessation can be improved. In 1996, the world health organization (WHO) officially recommended nicotine replacement therapy to all countries. The FDA has also approved at least four legal nicotine replacement products to help people quit smoking. The same seems to be true for e-cigarettes, which the WHO, in fact, calls the "electronic nicotine delivery system" and looks at alongside other nicotine substitutes. But while e-cigarettes are similar to nicotine substitutes, they are also similar to smoking in terms of behavior, so you can't just assume that e-cigarettes will help you quit.

Researches are inconsistent on whether e-cigarettes can help people quit smoking.

For example, a 2014 paper published on JAMA showed no improvement in quit success and no reduction in cigarette consumption among e-cigarette users in a longitudinal analysis of 949 smokers who participated in a twice-yearly online survey. However, at the same time, the author of the paper also said that this survey relies on individual oral reports, and the respondents do not know enough about the usage, frequency, and habits of e-cigarettes [7].

Another 2015 meta-analysis showed that smokers were more likely to quit smoking with nicotine-containing nape than without. This suggests that to some extent e-cigarettes do work as well as traditional nicotine replacement therapy. This study even shows that e-cigarettes are more successful than traditional nicotine replacement therapy in getting people to quit smoking (20percent success rate vs 10percent success rate) [8]. 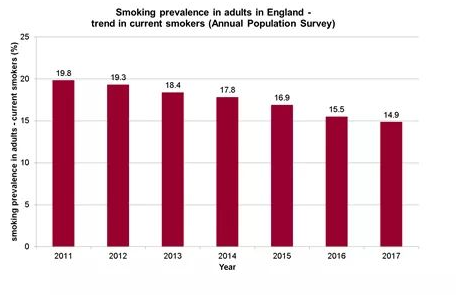 The department of public health credits e-cigarettes with an overall decline in smoking rates from 2011 to 2017.

In the UK, the situation is more optimistic. In 2018, the ministry of public health published a blog saying that e-cigarettes can help people quit smoking, at least in the UK. There are 2.9 million e-cigarette users in the UK, and more than half of it has given up smoking completely. And e-cigarettes are expected to help other 20,000 people quit each year. With the promotion of e-cigarettes, the smoking rate in Britain has been declining year by year, reaching a historical low of 15.5percent, which is only higher than Sweden in the whole of Europe [17].

To be conservative, according to WHO in 2014, the existing studies are not enough to prove that the use of e-cigarettes can help completely kick the habit of smoking, and the traditional nicotine therapy that has been proved to be effective is preferred [14].

WHO also believes that although quitting completely is hard, people can smoke and vape at the same time. Since they smokeless cigarettes, e-cigarettes can still be recommended to smokers [14].

Should e-cigarettes be banned

In the dilemma mentioned above, the specific side to focus on varies from country to country

For example: in January 2019, a charity called cancer research UK said there was a lack of evidence in the UK that e-cigarettes were leading teenagers to smoke. Young people's smoking rate has been declining, and the probability of non-smoking young people using e-cigarettes is very low, around 0-1percent [10]. 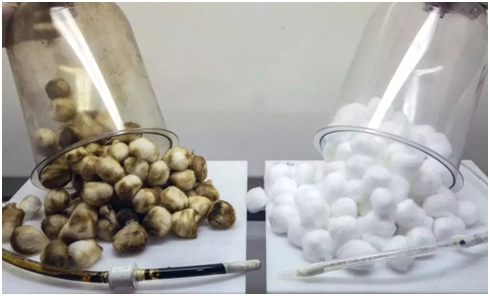 There are more young people in the United States use e-cigarettes, so the US has a more cautious attitude toward e-cigarettes